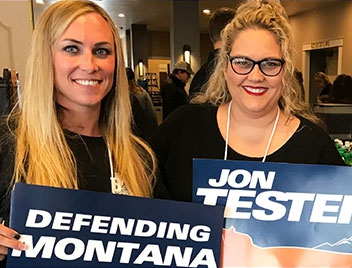 Though MFPE is a new union, we trace our roots back to 1882, when frontier educators first organized to improve Montana public schools. Their efforts became the Montana Education Association, which later merged with the Montana Federation of Teachers in 2000, forming MEA-MFT. The Montana Public Employees Association was started in 1945.

MFPE has a proud record of achievements for Montana's people, working families, public schools and services, and the middle class.

Though MFPE is a new union, we trace our roots back to 1882, when frontier educators first organized to improve Montana public schools.

Montana state legislature grants tenure after election of a teacher for a second consecutive year.

Legislature reduces vesting in the public employees’ retirement system (PERS) from 20 to 10 years.

Tom Schneider elected to MPEA board.

Legislature adopts state employee sick leave provision of 1 day/month and reimbursement of 25% upon retirement or termination.

MPEA members vote to retain independence from national union affiliation and create Morey/Bukvich Award in memory of a state and board member to honor exceptional MPEA members.

MFT blocks affiliation of MPEA with SEIU and AFSCME

Prebudget negotiations produces new market based pay system with an average base pay increase of 6%.

MEA-MFT sponsors “Stand Up for Education” rallies in school communities across the state.

Legislature increases GABA for public employees (not teachers) to 3% after one year of retirement.

MEA-MFT launches two years of “Stand Up for Education” rallies in school communities across the state.

Legislature protects assets of school district self-funded health care plans for the purposes for which they were intended (MEA-MFT bill).

In order to save state employee jobs, MPEA, MEA-MFT, and AFSCME prebudget negotiate no base pay increases for the 2011 biennium.

MEA-MFT sponsors “No Fooling with our Future” rally at the Capitol.

Legislature fails to adopt a prebudget negotiated pay increase for the 2013 biennium.

MEA-MFT, MPEA, AFSCME file unfair labor practice against the state of Montana and demand to bargain in a two-pronged attempt to secure base pay increases for state employees.

After 4-year freeze in base pay, MEA-MFT, AFSCME, and MPEA lobby through the legislature and bargain with the governor the largest increase in state employee pay in 20 years!  3 & 5% base pay increases over the 2015 biennium.

MEA-MFT creates a Hall of Fame and names Pat Williams, John Board, and Jim McGarvey (posthumously) as first inductees.

20 members run for election or re-election to state legislature.

Montana Supreme Court concurs with MEA-MFT's legal challenge of LR 127 and tosses it from the ballot.

MEA-MFT files legal challenge to Charter Corporation proposed I-172 asserting the ballot statement is argumentative, 172 is special legislation benefiting only one entity, and if adopted would require an appropriation.

Working in concert with MEA-MFT, MPEA directly affiliates with the Montana State AFL-CIO.

After losing three-times in district court, State of Montana surrenders to MEA-MFT’s litigation protecting guaranteed annual benefit adjustments for all persons enrolled in PERS and TRS on or before July 1, 2013.

MEA-MFT defeats I-181 crippling the state’s bonding capacity for special private interests outside the control of the state.

Delegates to annual meetings of MEA-MFT and MPEA direct the two unions to merge by mid-summer 2018.

January 20 – at a one day joint assembly  MPEA and MEA-MFT delegates vote to merge adopting constitution governing the Montana Federation of Public Employees.

April 6-7 – at the first annual MFPE conference delegates elect statewide officers and board of directors and adopt a new dues schedule and budget.

Nine members elected or reelected to the  state legislature to join three holdover state senators for a total of twelve members serving in the 2019 session.